Monitoring data available to PECBMS come from more than 20 countries. The number of countries contributing data and the number of species covered have increased almost every year, as new schemes have started up and provided their data. Almost all EU Member States are now represented, along with some neighbouring countries.

Number of countries contributing to the PECBMS has increased since 2003 from 18 to 28. Moreover, some of the countries with a scheme established recently have not contributed their data to PECBMS yet, but are expected to do this in near future. The overall number of species for that the PECBMS produces trends and indices has almost tripled since 2003 (see graph below). 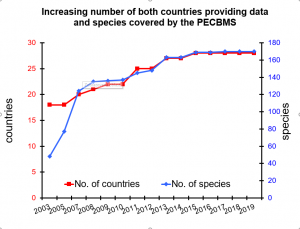